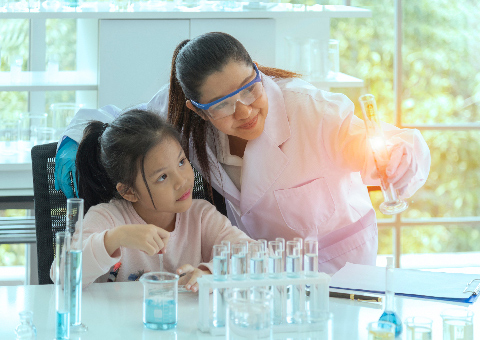 As the CEO of a biopharma company that is focused on innovation for patients, I was struck recently by the scientific thinking and discovery happening at an event that might surprise you: my daughter’s high school science fair.

The projects tackled scientific mysteries such as why different shades of color trigger a neurological response including mood, how mathematical statistics explain the so-called “Birthday Paradox” and more. This group of scientifically-minded teenage girls is just a small sample of the thousands of STEM programs and camps bringing forward interesting science nationwide. It’s surprising then, that the STEM workforce in America today is only 28% female.

What happens between adolescence and adulthood to make these curious and ambitious potential scientists choose a different path? A recent London School of Economics study finds that because of “conformity to social expectations, gender stereotypes, gender roles and lack of role models,” girls start losing interest in STEM at around age 15.

We must reverse this trend. It is not only in the best interest of our daughters, but it is vital to economic progress in the years ahead. We can only unlock progress in human health, environmental stewardship, renewable energy and a host of other scientific areas if we have the best, most diverse thinking available to tackle the challenges society faces. Just think of what a new generation of female scientists, arguably the most empowered generation in our history, could mean for innovation.

Case in point: CRISPR, one of the most exciting technologies in recent years, was discovered by a small group of scientists including Jennifer Doudna and Emmanuelle Charpentier. CRISPR has the potential to revolutionize medicine by allowing scientists to target a specific part of a genetic code and permanently edit DNA. It could transform the treatment of numerous diseases.

To encourage more role models like Doudna and Charpentier, The Society of Women Engineers (SWE) deserves praise for its extensive outreach to girls. In addition to scholarship and mentorship programs, SWE host hands-on building events for girls in grades 6-12, and they hand out SWENext Pacesetter awards to high school girls “who have built a solid foundation toward future success and fulfillment in engineering.” It’s a strong example of what we need more of across the STEM spectrum. The Allergan Foundation is a proud supporter of SWE.

At Allergan, our commitment to supporting women in STEM is clear in our recent hires for Research and Development. This summer, our R&D interns are 58% female. And so far in 2017, women make up 61% of our R&D new hires. I applaud the relentless work being done by female scientists across the biopharma industry and life sciences. I encourage you to take pride in what you have accomplished, and to share your experiences with as many young women as possible.

As for parents, with the end of the school year upon us, it is important to keep the science fire burning hot by encouraging our daughters to enroll in summer science programs. As any parent of a teenager can attest, we cannot tell them which path to take. But we can all do our part to help challenge the “social expectations and gender stereotypes” that prevent girls from sticking with STEM.

And if they do choose a different direction, we’ll support them, and root for some of their classmates to keep pursuing and achieve their scientific dreams.